Tal Ronnen Serves Up Vegan at the Texas Culinary Academy

When I received an invite to attend a free cooking demonstration featuring Chef Tal Ronnen at the Texas Culinary Academy I had to read it three times to make sure I understood it right and then pinch myself to make sure I wasn't dreaming. I awaited the date and excitedly told friends only to hear back "Huh?", "Who?" and "Good for you, never heard of him."

I would reply "Tal Ronnen is the chef who spent 21 days cooking up vegan food for Oprah."

Mariah's response to this was "Oh, working the day time TV circuit, eh?"

At this point I just shook my head and sighed to myself.

Chef Tal Ronnen is one of the top vegan chefs working today. His recipes are creative, inventive and cutting edge. His innovative work and humble demeanor is doing wonders for reforming America's negative diet trends.

Not only is he the guy who cooked for Oprah, he also catered Ellen DeGeneres and Portia de Rossi's wedding, Arianna Huffington’s party at the Democratic National Convention, and the first vegan dinner at the U.S. Senate. He's worked in top vegan restaurants all over the U.S. and assisted Chrissie Hynde of The Pretenders in opening her restaurant, VegiTerranean in Akron, Ohio. Yes, even Akron, Ohio is going vegan. 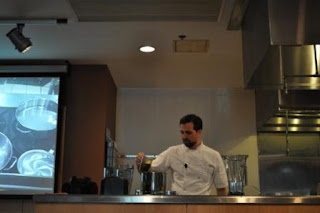 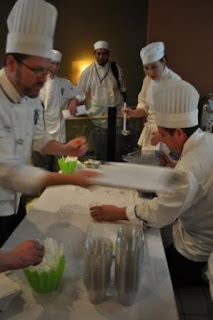 After Tal imparted his wisdom on us, small samples of his creations were served up by Texas Culinary Academy students.

Stomachs started growling and small samples were not alleviating the situation. Luckily, TCA staff invited a few bloggers to join them in a luncheon prepared by their students and featuring four courses from Chef Ronnen's new cookbook. I tried to stifle my fan geekdom and graciously accept the invitation. 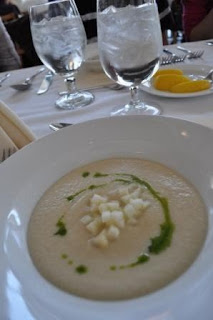 The apple chunks accented the light celery flavor of this creamy soup. 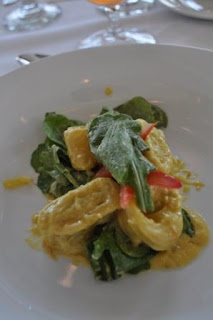 The tortellini was handmade and featured silken tofu with red palm oil instead of egg. The sauce was heavenly rich thanks to a generous helping of cashew cream. 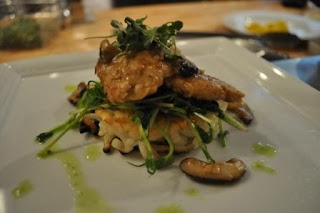 Third Course: Gardein "Chicken" Scaloppini with Shiitake Sake Sauce, Braised Pea Shoots and Crispy Udon Noodle Cakes
The udon noodle cake was a little tough but the rest of the dish was off the chart. Gardein is one of the best meat substitutes out there. Although there was one omnivore at our table who testified that he wouldn't be fooled into thinking it was real chicken, to me the texture and flavor was perfect. My philosophy is that meat substitutes don't have to taste exactly like meat, as long as they taste good. Having said that, I must confess I remember the essence of what chicken tastes like but not the nuances. The shiitake mushroom sauce was a perfect complement to the Gardein and the pea shoots gave the dish that necessary bit of green flavor and color.

Chef Ronnen helped develop Gardein, which is made from vegetables and slow cooked grains. Currently it can be ordered from the distributor for restaurants. For people like you and me, we can pick up seasoned Gardein products at Whole Foods and Central Market. Boyfriend and I tried the hot wings which were very spicy. We forgot to consider if there was gluten in them which boyfriend is mildly allergic to and whoops, we found out there was. So if you've got a gluten allergy I wouldn't recommend trying Gardein. I am disappointed that average individuals can't purchase the product in it's unseasoned form and that the already seasoned portions one can buy are a little on the pricey side. The buffalo wings ended up being about $5 for 8 wings or two portions. For us it would be cost prohibitive to try and serve these products at a get together or party.

Why would a vegetarian or vegan want to eat something that tasted like meat? So many of our food habits and cravings come from the experiences we had in childhood. Certain tastes and textures can invoke feelings of comfort, connectedness, or just being taken care of.

My childhood diet involved a lot of rich foods and animal products. Although I love vegetables and I haven't had chicken in about six years, I often miss the hearty texture and savory nature but do not want to eat actual chicken. Is it moral, environmental or health reasons that steer me away from meat? It's all of the above but mostly I am just uncomfortable with current factory farming practices and how far our society has placed ourselves from the actual food process. We go to the grocery store but we have no idea how the animal was treated, where it came from or what hormones were injected in it. Also we have so much variety to choose from today. Never in history have humans had such varied diets. Why not just choose more vegetables and grains? They are healthier for us and the environment anyway. 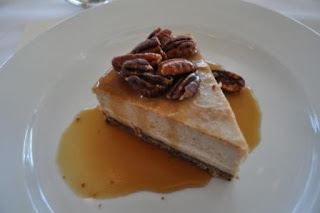 I have tasted some terrible vegan cheesecakes in the past (I'm looking at you Somnio's Cafe) but this was amazing. The texture was smooth and creamy and the banana flavor was finished with a lovely combination of maple syrup and toasted pecans. 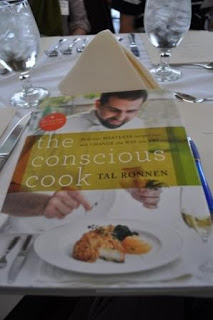 I had the priveledge of meeting Tal and getting my copy of The Conscious Cook signed. I am already looking forward to recreating his recipes and making them mine.
Posted by Laura at 4:29 PM