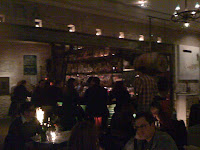 There have been some seriously interesting restaurants popping up on the East Side in the last year. To be honest, the East Side's kind of been off my radar since.. always. I know its unfair, but having lived in Austin on and off for 10 years now, the East Side just used to be the one place in town you drove through but never really stopped. However, in the last few years, some of my favorite restaurants have started or migrated to the East Side.

One of my new favorites is the East Side Showroom. I went there on a date last week with a gentleman who is *almost* as cool and awesome as I am. So when he mentioned checking out a restaurant I had never even heard of, I knew a) I had to go out with him b) we had to try this place.

There's no parking, just as an FYI, so you'll have to park in the street. That's usually a big minus in my book, but in this case, it rather adds to the gritty, urban East Austin feel of the place. The outside is rather non-descript, just a building with a screen door. But once you step inside, you are instantly transported to a sort of steampunk, 1930's lounge. The place is amazing to behold. Whoever designed the interior had a real eye for detail. The bar taps are in a giant metal contraption with tubes that run everywhere that would look at home in a submarine. There is a giant chalkboard arch in the dining room where the daily specials are written. The bar pass-through for the servers is a large wooden barrel. And there are interesting knickknacks and tchotchkies strategically placed everywhere. (I apologize in advance for the crappy picture quality, my iPhone's camera isn't so great with dark restaurants). 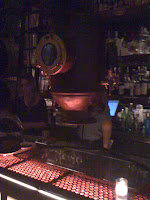 That's the bar tap! It looks like a something from a submarine right?

The food itself was very imaginative, but the taste was rather ordinary. I like that most of their ingredients are obtained locally. They even have a page in the back of the menu listing the farms they get their produce and meats from. My date and I split a gratin du jour appetizer, which happened to be ham and kale that day. It was very cheese, green and yummy. Kind of an upscale spinach artichoke dip.

I've been trying to eat a little healthier lately so I ordered the curried grits and greens with a farm egg on top. It was good, but the curried grits were a little peppery for my taste. The egg was served over hard (and I was given no other egg style option) which I thought was kind if a shame. An nice runny over easy or poached egg would have really brought the greens and the grits together. My date ordered the special of the day which was a spicy goat dish. I took a bite and am happy to report that the goat didn't taste "goaty." 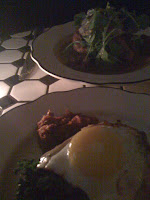 I generally don't like goat. Most of the goat I've had up to this point in my life, tastes like a goat smells.. awful. But I must confess I have a prejudice towards goats since, growing up, my Aunt had farm full of the distasteful creatures. But they weren't just any goats, they were weird deformed goats. Seriously.

Apparently, she had gotten a reputation in the area for being a kind hearted old lady who wouldn't turn down an animal. So when a local farmer would have a goat that didn't come out quite right, he wouldn't want it besmirch his goat lineage. So the poor thing would get wrapped in a town and dropped off on my Aunts farm. She, of course being a kind hearted lady, would nurse it to health and let it live out its days on her idyllic goat paradise.

I know that sounds all awesome and sweet.. until you actually meet the goats. Now, granted, most of these goats weren't quite right. There were goats with 3 legs, goats with 4 horns, and, honest to God, a goat that had like 6 testicles. It was disturbingly mesmerizing. But despite all their cute deformities, those goats were, at their core, mean and destructive creatures.

They would attack at a moments notice and would ram your butt when you weren't looking. I've been knocked over by more than a few of those vicious bastards. One time a goat got out and managed to eat ALL the bumper stickers off my moms car. Really. We woke up one morning and all the bumper stickers were gone except for one lone piece of sticker hanging out the side of the goat's mouth.

Ever since then, I've generally been averse to eating goat. But flash forward to East Side Showroom. Their goat isn't so bad. I could eat one of their goat dishes and not think that the animal it came from is a trash eating, angry, old billy goat.

Where East Side Showroom really excels though are in their drinks. I WAS on a date, so I sampled more than a few of their cocktails. I don't remember the names of any of them (and they're drink menu isn't posted on their website, shame!) so I can't recall the specific drinks I had, but please be assured that their drinks are creative and tasty. Well except for the special of the day toddy. That one tasted like a smokey hot dog. Avoid that one, unless you like drinking smokey hot dog. 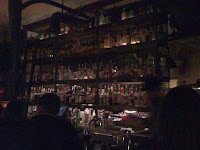