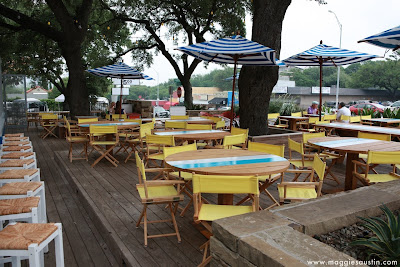 (All delectible photos are courtesy of Maggie's Austin. Thanks Maggie and Josh!)

Boy life has been amazingly busy lately! It seems like I’ve been running at full steam for a month now! Bachelor #7 and I didn’t work out, so I’m back on the dating bandwagon again. I’ve even been on two dates this week, but more on those in future posts. I spent a weekend in Seattle, I went to an awesome Bloggers Potluck, I managed to see Star Trek at the IMAX not once, but twice (and I’m totally in love with 4 of the characters). I went to a Derby Party and a BBQ where Lee smoked about 30 pounds of meat (both on the same day no less). And in the midst of all that, I’ve had to arrange the move to my new shiny downtown apartment AND fight my evil health insurance company who thinks the ability to climb 1 flight of stairs on my bum knee is recovered enough deny me any more physical therapy.
I feel a little stretched thin to say the least. It’s hard to believe It’s been almost a month since I last posted! But to be honest, I haven’t been venturing into many new restaurants lately. It seems the bad economic hurricane has finally hit Central Texas, and its effects have been particularly harsh on early 30-somethings. Apparently we’re getting to the age where we’re no longer college-new-hire-cheap but we don’t have enough experience and are thus the first to get cut when the economy takes a dip. Of all my friends in Austin, probably a good 75% are either currently out of work or have been out of work. And while I haven’t been hit by Hurricane Geitner, I have been feeling the effects of its refugees in the form of fewer dinners out with friends.

However, I have managed to get to a few new restaurants (entirely for your benefit of course), by using stealth, guile, and downright trickery. Take Mother’s Day, for instance. Sure, my family could have been thrifty and settle for a perfectly nice meal at home. We could have grilled some salmon, had some fresh fruit and salad, and called it a day. But I, fellow foodies, was looking out for your best interests. I thought why settle for brunch at home, when I could try (and review) a new restaurant! So I sneakily made reservations at Perla’s, a new seafood restaurant on South Congress (where Mars used to be). Who would say no to my Mom’s favorite type of food, seafood? No one!

Now, the first thing we noticed was that parking was a little tricky. My Father and Aunt, who always manage to get rock star parking, found spots in front of the restaurant on the street. I, however, knew about the free parking garage behind Cissi’s, and opted to park there (yes you read that right, there is free parking on SoCo). My brother, however, has neither luck nor SoCo know-how and ended up parking down the street. Use the parking garage, it’s there for a reason.

The second thing you’ll notice about Perla’s is their amazing patio. If you dig back in your memory, you may recall that Mars had a very nice people watching patio, and Perla’s has managed to take that trendy see-and-be-seen patio and transform it into something comfortable and a lot less snooty. The zen and BDSM inspired décor of Mars has been replaced with the softer, gentler feel of a mid-Atlantic boardwalk. The tables are reminiscent of smooth 1950’s wooden speedboat hulls, the sunny yellow chairs and blue and white striped umbrellas remind you of flags on a schooner, and the white painted sisal stools are oh so Atlantic. There’s even a white sanded shuffleboard you can try your hand at. The inside of Perla’s is equally mid-Atlantic and 1000% transformed from Mars’s old décor. Instead of metal and black lacquer, there is distressed wood, sunny yellow paint, and an enormous (and pristinely kept) fish tank.

We seated ourselves in the corner table right next to the patio and surveyed the gigantic menus. Seriously, the menus took up the whole table, and then some. But we managed to balance the menus without a major incident. Everything on the brunch menu sounded really amazing too. Note to oyster lovers – there finally an Austin restaurant offering more than one kind of oyster! There were also smoked fish dishes, egg and fish dishes, fish sandwiches, and an assortment of sides that sounded almost as good as the main dishes. I decided on the Lobster Coddled Eggs. My mom went with the Lobster Rolls and several other folks ordered the Big Blue (a blueberry and banana pancake). My dad, being ever sensible ordered several sides to eat as a meal.

I love, love, love oysters, and even though its not technically oyster season anymore (May is not a "R" month), I thought, what the hell, if they’re offering, I’ll try them. I honestly forget which oysters I picked, but they were tasty. Not as awesome as the oysters I’ve had in Seattle and Vancouver, but better than the gulf oysters we normally get here. There were even accompanied with Mignonette sauce, something you rarely see in Texas. As I’ve gotten older, I’ve come to really love a good, musky vinegar and shallot mignonette sauce with my oysters, but it used to be a treat I’d only get in coastal states. Not anymore. I’ll definitely be going back to Perla’s for an oyster and mignonette dinner in the future.

My father ordered several hush puppies and fried okra as an appetizer and both were very good. The hush puppies had a nice bite to them and were deep fried to a nice golden-brown crispness. I liked them so much a snuck a second one when no one was looking. The okra was probably one of my favorite parts of the whole meal. They were coated in a crisp cornmeal batter and had a very satisfying crunch before the okra goo covers your tongue (okra goo is called mucilage just fyi).

My mom opened her Mother’s Day gifts while sipping a nice (but pricey) mimosa. We all laughed at the silly cards people had given her (while I stole yet another hush puppy, shhh). When the plates arrived, we were greeted with a lovely, light seafood smell. My Lobster coddled eggs were amazing. Layers of baked egg, generous chunks of lobster and the delicate flavor of tarragon all mingled together perfectly. When placed on a crisp home baked cracker, the entire dish was perfection. My mother’s Lobster roll was another story. The generous bread roll was soft on the inside and crispy on the inside and absolutely brimming with large chunks of lobster. But a bite of the mayonnaise covered lobster was rather bland and uninteresting. My mother really loved it though, so I guess if you’re looking for something bland, creamy and fresh, this is the sandwich for you.

I was a little concerned about the pancakes when they came out. They looked kind of gross and dumpy - a huge blueish brown lumpy mess. But one slice into the steamy pancake revealed large chunks of banana and blueberry and an amazingly fresh, naturally flavor. The most disappointing (side) dish were the lobster stock cheese grits my father ordered. I was expecting something amazing and lobster infused, but got run of the mill cheese grits akin to something you’d get at a back-water Texas diner. There wasn’t even a hint of lobster stock.

The dessert, however, was an existential experience. The Wild Blueberry shortcake was nothing less than spectacular. Crisp, butter shortcake and tiny fresh blueberries in a sweet syrup with crème fraiche and sugared thyme. Everything blended perfectly and left for a plate-licking experience that I will definitely be repeating again.