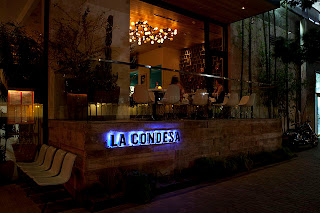 Laura: The first time I visited La Condesa I was a bit put off. Sure it was for their grand opening and everything was comped, but they had invited so many people that it made it difficult to taste anything, I was shouted at by another party goer for indulging in some barside guacamole and the whole thing came off as pretentious and very Dallas-like. It's not a mistake that I picked up on a Dallas vibe. The first La Condesa was located in Victory Park in Dallas and closed in May 2009, just a little bit of a year after it opened.

Mariah: I never made it to that opening, but I'd gone to La Condesa shortly after it opened and was put off by the see-and-be-seen vibe I felt.But the food was decent enough and the it was close to my apartment, so I found myself there on an occasion or two.

Laura: Now that the buzz around La Condesa has settled and the crowds have calmed down, it is an incredibly enjoyable happy hour spot. Leslie, Jenn and I settled in to the sleek and stylish bar yesterday to do a little tasting of half priced drinks and discounted appetizers. 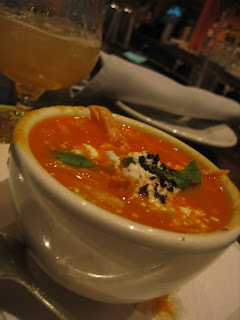 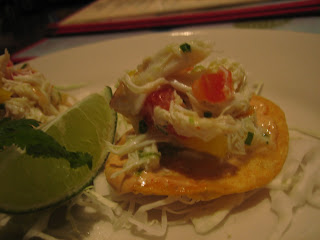 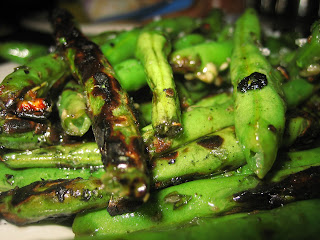 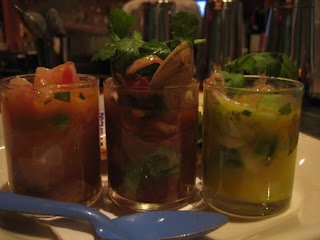 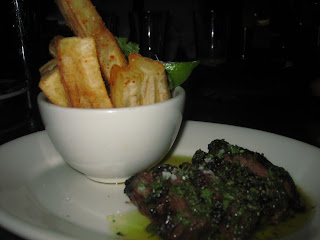 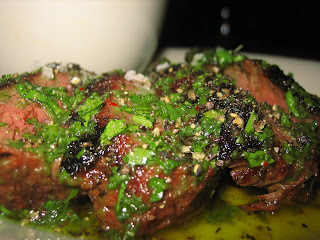 Close up of the hanger steak. Happy Hour $8

Laura: No, I did not try the steak but I did try the yucca fries with a side of chipotle mayo. They were crisp on the outside, soft on the inside and just delicious. Jenn really enjoyed the steak as well.

Mariah: On the several occasions I've been, I've had the Chile Relleno. It's a fat poblano stuffed with quinoa, manchego, and butternut squash served in a light tomato sauce with pepitas on top. It's really quite good in a non-traditional sort of way. But whenever I go, I always make sure to have a side of platanos and the elote. The platanos are wonderfully sweet and caramelized plantains with a sprinkling of queso fresco. Yum! And the elote. Oh, I could write an ode to the elote. Its a wood fired ear of corn covered in a thick cream and rolled in cheese. It. Is. Heavenly. Period. If you go there and eat nothing else, get the elote.

Laura: I had a chat with the bartender (not mixologist) about La Condesa's commitment to buy locally. They buy as many ingredients as possible from farms within a 60 mile radius of the Austin. I'm not sure how much ends up being local, but its a start and the intent is there. 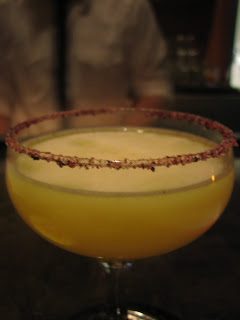 The ginger flavor in the Alma Blanca is just enough to not be overpowering and compliments the habanero kick. 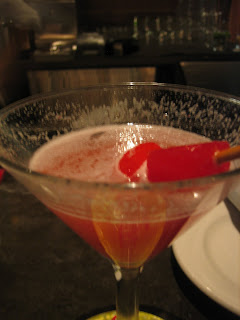 Laura: The Watermelon Elderflower Martini is the drink that brings me back to La Condesa. It is sweet without being cloying and although it is technically more suited toward summer, I am happy to drink it anytime. Not pictured is the El Cubico - a tobacco infused tequila, vanilla liqueur, lemon, grilled pineapple juice, mezcal essence concoction with a saffron infused salt rim. This was by far Leslie's favorite drink. I couldn't get past my dislike for the tobacco flavor, although oddly enough it doesn't bother me in red wine.

Mariah: The drinks at La Condesa are generally very good and very interesting. I usually never make it past the Alma Blanca (I'm always a sucker for a drink with spicy tequilla). I like it so much I don't think I've ever gotten anything else! But the rest of the drinks *sound* like they'd be good, but you'll have to trust Laura's opinion of them.

Laura: Sitting at the bar and watching the bartender at work is a highlight of the visit. The bartender crafted Jenn an off-menu Cablecar that simply was out of this world. Another highlight of visiting La Condesa is playing the "How much do you think it would cost to build that light fixture" game with Leslie. These are the kind of activities that occur when a professional film prop designer and a former mechanical engineer meet over cocktails. The conclusion is that at $4 a connector, the light fixture would quickly become very expensive.

Laura: Another thing than can get pricey is the dinner menu. It is worth a try, although other bloggers have given it mixed reviews and Taco Journalism definitely does not recommend the tacos. My suggestion is to stick to the less traditional and more inventive items on the menu. That is where you will find the stars of the show.