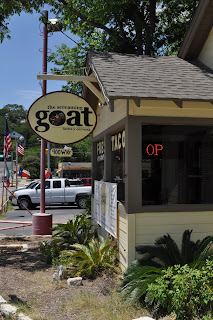 The first time I went to Screaming Goat I was tasked with picking up breakfast for 15 at my office. I was running late so I tried to call in and order. The phone line was busy for about half an hour. I rushed my procrastinating ass over to their 10th and Lamar location (formerly known as Chuco's) and in a panicked tone asked for 15 breakfast tacos. I apologized to the man behind the counter for such a ridiculous rush order and explained that I had tried to call. He told me he was on the phone right then and there with the phone company trying to get them to fix his messed up second line and hence he was tying up the first one. I eventually got my tacos and made it to work only about 10 minutes late for my meeting and with a $5 gift certificate the man at Screaming Goat had given me as an apology for the whole phone line shenanigans.

My coworkers LOVED the tacos. "Screaming Goat? What kind of a name for a taco stand is that? And, oh, it's so far from Round Rock. Nope, sorry, I'll never make it down there, but keep bringing in the tacos!"
Have I mentioned that since getting laid off I don't miss having to drive to Round Rock for work everyday?
Some of my favorite things about Screaming Goat is that there are $2 beer specials (on Mondays $1.50 Tecates) every day of the week. Food specials start everyday at 4 pm. On Sundays and Thursdays it's 75 cent flautas. 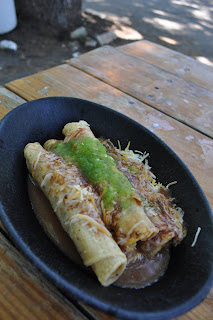 Having a trivia night and a vegetarian menu gets extra points in my book. Also, when the weather isn't 105 degrees (does anybody remember what that was like???) you can sit pleasantly at their picnic tables outside. 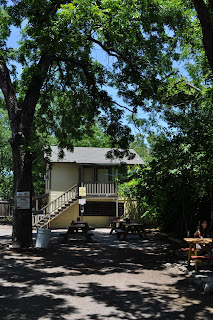 Picnic tables in the back

My favorite item is the migas taco. They offer six different varieties of salsa to accompany your meal ranging from mild to hot. I usually go for verde which definitely has a kick to it. Boyfriend and I usually pick up a few late on Sunday mornings before settling down to watch political tv shows in my living room.

Migas tacos and Gwen Ifill at the same time? Awesome.