Have you guys been to House Wine hidden behind the P Terry's on Lamar on a little street called Josephine? It's in a really cute old house with a great patio. The decor is fun with paintings from local artists and couches placed throughout. It manages to be cozy and remain urban. Ever a plus, there's some parking in the back.

Leslie and I stopped into House Wine for a drink. I was hoping for some happy hour specials, but House Wine only offers happy hour between 5 and 7 on Friday. The woman behind the counter suggested one of their $5 glasses that they offer on a regular basis.

At this point we had become distracted by something shiny. Or perhaps I should say sparkly. Sparkling wine cocktails? Did you think I was going to say no? Was that ever even an option? 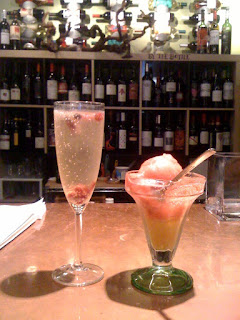 Leslie chose a sparkling wine and pumpkin cocktail (how very autumn) and I went with a sorbet and sparkling wine concoction. I highly recommend both.

After our initial cocktails, we lingered over one of the $5 glasses of wine. The sparkly drinks were around $10 each and neither of us are currently involved in any financially lucrative pursuits. I guess that's why we have time to sit around and drink wine.

As we looked around, we began to notice that the place was full of people on girl dates. It was swarming with girls who had settled into a table or couch with their BFF to discuss life, work, grad school plans, dating, family and all the rest. Yeah, we were totally fitting in. I also imagine its the kind of place you meet up with your book club to discuss the latest by Jonathan Safran Foer.

The food at House Wine isn't very extensive. There are some pricey but delicious cheese plates and that's about it. You can sneak over to P Terry's and bring some in, but I worry that my french fries are going to stink up the place.

Leslie and I were so enamored by our drinks that a week later we took a trip to Specs to try and recreate the pumpkin drink. Alas, the Specs employee informed us that restaurants buy up that type of pumpkin liquor and it doesn't get sent to the stores. We bought pumpkin flavoring and praline liquor to make up for it. We then went home and made a total and utter disaster. Seriously kids, take it from us and don't try this at home.

Bottom Line: Nice atmosphere for a glass of wine. Try 1/2 price drinks on Sunday if you want a deal- they knock the price down on whatever bottle is still open from Saturday night.
Posted by Laura at 3:04 PM