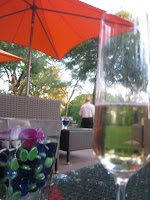 Laura: This week Trio hosted a blogger happy hour to show the foodies around town just what their menu holds and as a way to say "Hey, we know we are located in the Four Seasons Hotel and this is a recession, but we aren't that snooty or expensive, honest!" Mariah and I are always up for checking out a new place, especially when it's well executed, comped and full of kick ass blogger friends.

Mariah: I'd been avoiding this place for months. I'd heard good things about it, but I have to confess, I'm prejudiced. I have a deep loathing of most high end hotel restaurants. They're snooty, a little too polished and full of pretentious food that just doesn't taste all that great. I've experienced more than my fair share while traveling so I expected the same here. While I'm confessing, let me also tell you that the following meal we're about to review was 100% comped. BUT this in no way effects our review. I looked and the prices and honestly weighed it into the review as if we were paying for it.

Mariah: Did I mention they have free (FREE) valet parking. That was another reason I'd been avoiding this place. I didn't want have to pay for the privilege of eating there. I admit I had a fairly negative feeling about this place before we even got there. But the free parking made me feel a little better. Oh, and its REALLY handicapped accessible. The restaurant is on the ground floor of the hotel, but there is an elevator that takes you down if you need it (which I still do).

Laura: We arrived fashionably late to find the food and drink was already a flowing. This time I remembered to bring my camera, a crappy little point and shoot, but a camera nonetheless.

Mariah: We grabbed seats by some of our favorite fellow bloggers, Logan and Rachael of Boots in the Oven and Crystal of Poco-Cocoa. Usually at comped food blogger happy hours (yeah we've been to a couple now) have a selection of wine, around 3 or 4, and a table with 4 or 5 of their appetizers on them. Pretty good, but the Trio folks with their deep pockets had gone all out. They let us order anything and everything off their happy hour menu our little foodie hearts desired. Everyone ordered what they wanted, but it quickly de-evolved into a family style pot luck. Take a little bit and pass. That was how I ended up with a tasty oyster before I'd even sat down to order. 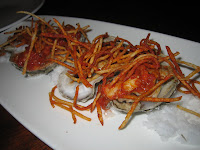 Laura: They get an A+ for presentation on this one. 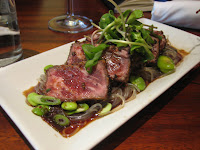 Laura: Then there was the wine. I looked up and down the wine list and was fairly impressed. There was a good selection of sparkling, red and white wines. This is the Mum's 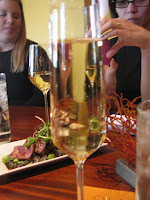 Mariah: I honestly don't remember what I ordered. But I ended up having the glasses of white wine (hey I wasn't paying for it) and they were all good. The chablis was the best, but I can't remember the label. Sorry. And then was when I fell in love at first site. I have a soft spot in my heart for anything raw, so when the tuna tartare arrived, I was immediately intrigued. But when I took a bite, I knew I'd fallen in love. The tuna was completely 100% fresh and amazing. It was on a bed of mashed avocado and had a lovely lime vinaigrette. The accompanying sesame crisps were a night and day difference from Paggi House's overpowering taste. They were perfect with the understated tuna. Love. Love. Love.

Laura: All the cheese was locally made. The one on the far left was a very subtle goat cheese. And the one on the far right was a really sharp blue cheese. Mariah and I weren't too impressed with this cheese plate until later on when they had moved to room temperature. At that point my favorite was #3. It was soft and rich and perfect with the glass of crisp and mineral flavor rich Chablis I moved on to. 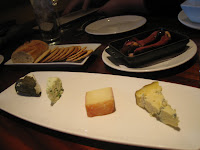 Laura: Um, did I mention the truffle fries? They came with lightly fried crispy rosemary and a lemon butter aoli that was amazing. Sadly there were only 3 vegetarian options on the happy hour menu. This was one of them. 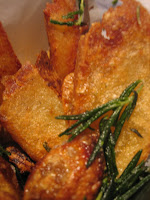 Mariah: OMG! The truffle fried were great. At first I didn't taste the truffle, but the more I ate, the more I tasted the subtle truffle flavor.

Laura: Logan and Rachel from Boots in the Oven ponder the question: What menu item have we missed? 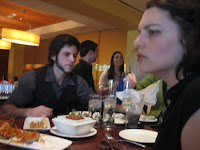 Laura: Oh yeah! Chipotle Mac and Cheese! Eh, it wasn't what I would expect from a Four Season restaurant. It was more like mid to upscale BBQ restaurant Mac and Cheese. At Trio I would expect something more like the Mac and Cheese from Wink. The chipotle didn't complement the pasta and heavy cream correctly. Mariah said they used liquid smoke, but I'm thinking it was more of a vinegar-like Tabasco flavor. And even though this wasn't a perfect dish, I couldn't stop myself from eating it. So there you go, it obviously wasn't that bad. 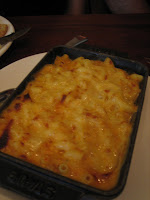 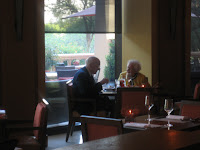