Teddy and I like to hike. Despite living in Texas most of my life and her living in Austin for the past few years, we managed to never make it to Enchanted Rock. This seemed like a situation that needed to be remedied.

On a random Tuesday while the good people of the world were suiting up and going to work, Teddy and I day tripped to the Texas Hill Country. First we needed to arm ourselves with supplies. And by supplies, I mean breakfast tacos.

Giovanni's Pizza Stand is located inside an unassuming Valero station on South Lamar. They make the best breakfast tacos. We geared up here. 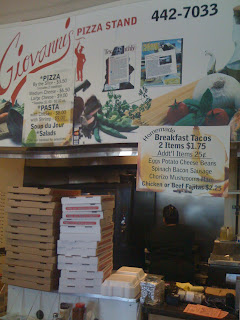 Giovanni's Pizza Stand - For the record, they make damn good pizza and pasta too.
Armed and dangerous, we began our drive. We passed several wineries on the way toward Enchanted Rock and mentally noted their locations. Some appeared open, others did not. Enchanted Rock was the main priority, but a few wineries after our big hike could make an excellent reward.

After about two hours of driving, we arrived. We paid our $6 each and made our way to the trail head. I have to admit, it was a steep climb. 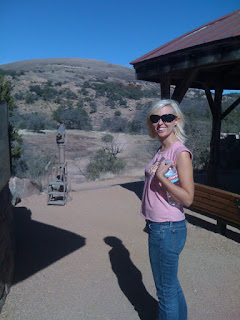 Teddy at the trail head.
Enchanted Rock is just one of a few domes in the area. There are several trails you can take to explore the area with interesting geology to keep you engaged. The top crust of rocks are broken and split and have shifted from gravity and erosion. They coat the top layer of the dome with flat chunks. There are also massive rock structures that make interesting visuals. It's fun to image how they got there and then at the same time not want to be around during a landslide or heavy rain. 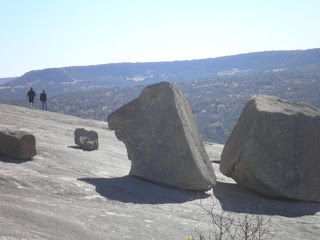 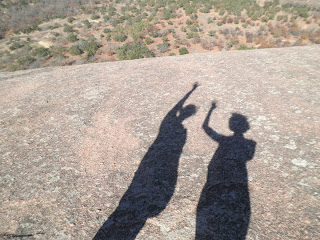 Woohoo, celebrate! we made it to the top.

Now that we felt all accomplished, it was back to Fredericksburg for some winery shenanigans. We pulled up to the main drag and popped into the first place we saw offering tastings. We decided to go for the 6 tastings for $5 from a man who didn't know what to think of us fast talking girly city slickers. He mostly mumbled and gave us the stink eye. Oh well, we got to try some great wines. General consensus is that these can be purchased cheaper at Whole Foods and most bottles in this store were overpriced. However, the tasting was a screaming deal. Out of this lot, the McPherson was our favorite. 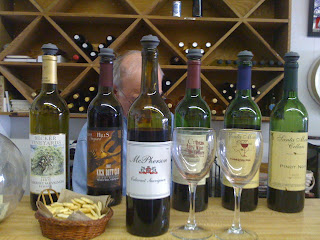 The clear winner - McPherson Cabernet Sauvignon
As we grabbed our jackets and went to the register to pay, we struck up a conversation with a younger gentleman sitting at the bar. He was obviously financially invested in the wine store but I never really got it clear whether or not he was the owner. The man who had been serving us suddenly perked up as the Fredericksburg wine schtick was explained to us. This strip is considered a historical district. Historical districts in Texas can apply for permits that allow people to drink on the streets. We were welcome to get roadies and cruise the area.

We also asked for a recommendation for food. We had engaged in some decent exercise and a little wine, yet we had not ate since Giovanni's. Unfortunately it was about 3 pm and most places (including the recommended places) were not serving lunch. We were really unlucky to have picked Tuesday for our outing as most of the strip was closed on Tuesdays.

We ended up at the Fredericksburg Brewery for lunch. Food wasn't great but the beers were home brewed and excellent. 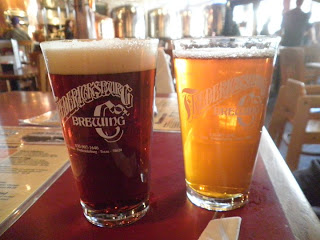 There was time for a few more samples of Texas wine and some window shopping before everything shut down around 5 or 6 pm. Some of the shops were tacky Grandma's house Texas handicraft, but there were some cool designer-y stores too. 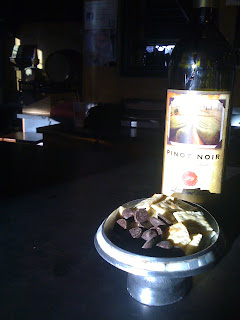 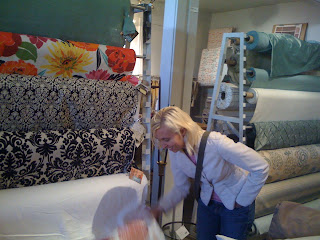 Teddy checking out fabric at the uber cute Red In Fred design and furniture shop.
We stopped into House. Wine. for one final glass (not tasting) before heading back to Austin. We were grateful to take a break from Texas wine for this French lovely. The change in atmosphere from tasting to wine bar was welcomed too. 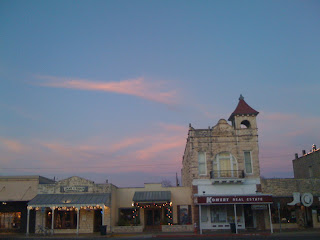 My advice for a day trip to Fredericksburg?

Start in the morning. Clear your entire day. Check the weather. Hydrate. Hike Enchanted Rock. Stop in on Main Street for lunch and wine tastings. Designate a driver. Check out Red in Fred for a short break from the wine. Go to House. Wine. if you want a break from Texas wines. Don't go on Tuesday. Cash makes things easy.