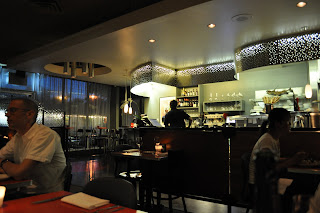 408 C East 43rd Street
Austin, TX 78751
(512) 451-1218
http://www.finoaustin.com/asti/
It had been a while since Mariah and I had met up for dinner. We were starting to miss our weekly excursions so we dusted off our recessionista skills and decided to use one of our restaurants.com coupons. If you aren't familiar with the site, they sell $25 coupons to area restaurants on the cheap - usually for $10. I had purchased several during a sale for $2 each. Stipulations are that you have to use the coupon within a year's timeframe, you tip your waiter at the pre-coupon cost, coupon does not count towards alcohol and sometimes they require a total bill of $50 or more. We thumbed through the coupons we collectively owned and decided on Asti in Hyde Park, the sister restaurant of Fino. I had been there once and had liked the atmosphere as well as the food. The menu is seasonal and it feels like a small neighborhood cafe.
The first sight upon entry to the restaurant is a nice sized bar area where drinks and apps are served. To the right and back are areas of tables for full dinner service. The hostess sat us awkwardly close to a couple that appeared to be on a first date. It felt a bit intrusive so Mariah and I gave each other "the look" and moved over to the next table. 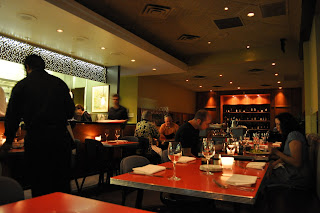 We looked over the wine list and since we both felt like a glass or two, we decided on a bottle. This bottle of prosecco was decently priced and quite tasty - dry and very bubbly. Bread was brought out for us to munch on by a cute server who somehow we ended chatting up about post-apocalyptic societies. 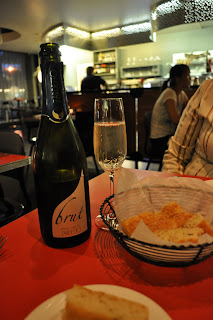 For an appetizer, we went with stuffed mushrooms with fried breadcrumbs and truffle oil . They were delicious and presented well. They weren't a dish that someone with a decent knowledge of the kitchen couldn't pull off, but it was nice to have them. 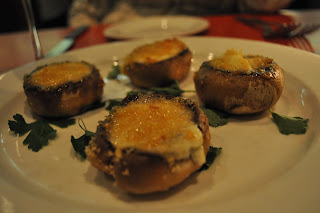 Mariah ordered a pasta that she ended up really hating. I swear she only had two bites claiming it was too pepper-y. 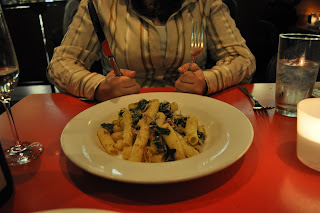 I chose the tomato risotto with summer vegetables. The server recommended it over a pizza and I figure he knew best. It wasn't bad, just not what I was expecting. The tomato was overpowering. I felt like I was eating tomato soup and the vegetables were boring. I wouldn't order it again. 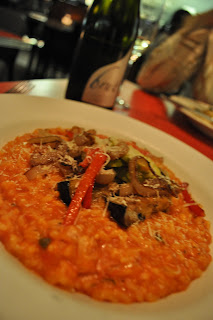 The server asked us how our food was and being the blunt bitches we are, we told him. A few minutes later a manager was coming by to discuss the food with us. We told him we knew the food did not match our personal preference but that did not necessarily make it bad. He was kind, saying he understood and that dessert was going to be on him.

I was starting to feel pretty awful for complaining. It wasn't an intentional complaint, the food definitely was not complaint worthy, but after you compare your plans for your post-apocalyptic society, you feel a certain bond with someone and sometimes end up blurting out that you didn't like the food. What? That's never happened to you? We chose the vanilla panna cotta and fresh Texas peaches. It came with a cute little cookie. The panna cotta was very gelatinous. It wiggled on my spoon but tasted perfectly vanilla and went down smooth and delicious.

Despite disliking our main courses, I still think Asti is a good restaurant and would feel comfortable recommending it to others. Just don't get the tomato risotto.