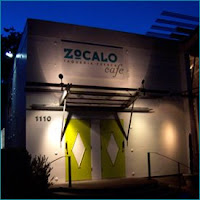 Mariah: So Laura and I have been gallivanting around local media events. Apparently there are PR people out there who treat bloggers like serious journalists. Little do they know, we're just weekend hobbyist. But who am I to turn down a free open bar and all the appetizers I can manage to stuff down my throat? This latest free shindig was sponsored by the Texas Hill Country Food and Wine Festival. Apparently there is a whole festival in Austin every year dedicated to food and wine. If it weren't for the HEFTY entrance fee ($45 for the Sunday Fair alone), I'd have let y'all know about it long ago. But seriously? Who can afford to blow $45 in this economy? Not many people.

Laura: Yeah, we pretty much feel like we've hit the jackpot here. Free food and cool people just for doing what we love? What a great deal. I have to disagree with Mariah there on the Texas Hill Country Food and Wine Festival entrance fee. Sure it's not cheap, but this particular orgy of food and drink in question happens once a year, features great chefs and wine and Sunday is a 5 hour event. $45 every weekend adds up, but on an occasion like this for a true foodie, one might be inclined to dig a bit between the couch cushions.

Mariah: Anyway, they hosted a special "Media" reception at the Hotel Saint Cecilia, that trendy new boutique hotel off South Congress. Its a lovely little space with hip rooms and divine grounds. But at $450 a night (yes, you read that right), who but P Diddy could afford to stay there? But, it was nice to poke around and gawk at the finery I'll never be able to afford in a million years. Its owned by the same people who are responsible for the San Jose. My cousin stayed there and it was really nice and hip, and at $250 a night, I thought *IT* was steep. But no, it wasn't expensive enough. They had to spawn an even more expensive and awsome hotel. Apparently there is a market in Austin for ultra rich hipsters. Who knew?

Laura: This place was gorgeous in a super hipster kind of way. Man oh man I want the designer to come revamp my home. I can't afford to spend the $450/weeknight ($550/night on a weekend) to stay there but if any of you out there do, please give me a call and I'll come hang out with you next to the awesome pool.

Laura: Was it really $27,000? Are you sure you didn't add an extra zero in there? Either way it was seriously comfortable. If I was staying there I probably wouldn't get out of bed all day. 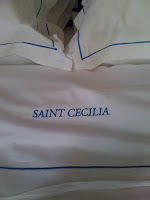 Laura: Notice the record player on the chest. Every room comes with one and you can check out records from the office to play. You also can't see it in this photo but there's a super kick ass portrait of Neil Young on the wall. 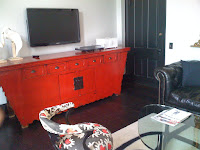 Mariah: And since we ARE a food blog, I thought I'd let you guys see those $9 vintage looking candy bars you'll never get to eat. 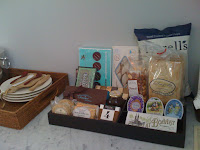 Mariah: And who knows where the hell they found this butt-cheek chair (thought the bathroom cabinets were all IKEA) 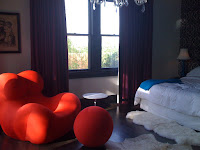 Laura: Yeah that struck me by surprise. Uber expensive bed and furnishings and IKEA bathroom cabinet and IKEA rug. I suppose if you can afford to stay here you'd never know some of the furnishing were IKEA because you probably don't shop there.

Mariah: We grabbed a glass (or 10) of the free Messina Hoff wine (their Chardonnay this year is better than its been) and strolled around the gardens. They had artfully crafted beautiful outside spaces. Including this fire pit that you too could sit around, enjoying a glass of wine, after ACL. Too bad there's a 3 year waiting list and a $600 entry fee. (P.S. That's Laura getting saucy).

Laura: It's my best "the world will never understand me" distraught melodramatic heiress pose. 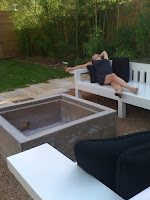 Mariah: Or walk down this zen-like stone path 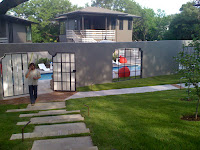 Mariah: To the even more zen-like lap pool (they're too good for a full pool - no one in a $600 bathing suit actually swims anyway).

Laura: Do you think they'll let me swim there in my Old Navy bathing suit? 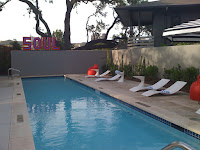 Mariah: No, Laura, they won't. The whole event was catered by Whole Foods. They had hand passed appetizers that were tasty, but surprisingly hard to eat. The sausage slices with slaw were hard to nibble in a ladylike fashion. You have to stuff the whole thing in your mouth and chew quickly. The watermelon with pickled onions was excellent, but again hard to eat. Blah blah, you'll never eat these, so why am I bothering to review them?

Laura: The appetizers I tried were really good. If you got there early enough you could actually have quite a few without much effort. Kudos must be given to the staff. They were incredibly hospitable. I know you are never going to eat them, but I'll make you jealous of them anyway.

Laura: The watermelon with pickled onions that Mariah was describing was also complemented by a dash of goat cheese and served in a cocktail glass. Very refreshing and the watermelon worked fantastically with the cheese and pickled onions. Yum. I had quite a few of the mini mushroom tacos in corn tortillas with micro field greens and a dollop of yogurt. There was also a smokey-like shrimp topped on a black eyed pea patty. A crispy quail with what looked like a honey mustard sauce and smelled like my childhood. And some sort of beef with blackberries and rich dark BBQ sauce. Oh and a few other items I can't even remember. As the crowd started piling in, the appetizers became more and more elusive.

Mariah: After appetizers, Laura and I were still a little hungry. The small bites of delectable food were just enough to whet our appetites, but we were just full enough not to enjoy a full meal. We threw around a bunch of options. Pizza? No, too filling. Ice cream? No, not filling enough. Lemon cups at Wink? We were getting closer. But I didn't think I would handle even more wine. Then Laura had a brilliant idea... Churros at Zocalo.

Laura: Yeah, I had to use a bit of psychology. I knew Mariah wanted something sweet, but I wanted something with substance. I needed to make a suggestion for something she would go for at a place where I could get something savory. Hence the suggestion of Zocalo. Plus, they have a really great patio and West Lynn is an extremely convenient area for me. Oops. Now I've given away all my secrets. Anyway, it's owned by the same guy who does Galaxy Cafe which happens to be next door.

Mariah: Zocalo has become one of our Had-Too-Much-To-Drink-Now-We-Need-A-Cheap-Snack kind of hang out. We've been several times now, and even eaten a few entrees, none of which I'd call particularly noteworthy. Plus, as we were parking, I noticed a bright yellow 350z in the parking lot. It's kind of a distinct car, and it just so happens that my friend Eric owns one. And sure enough, there he was on the patio, with a strange dark haired girl in a pony tail. I texted him to ask "At Zocalo too, are you on a date?" But I never heard back from him, so Laura and I decided we were going to walk up and say Hi and if he were on a date, we'd introduce ourselves, let said date know that Eric has hot awesome friends he happens to run into all the time, thus upping his single man status (hey, I've watched those douchey VH1 shows with Myster, I can be a good wing woman). But when we approached, we discovered that it was our friend Connie, and not in fact a date.

Laura: So we decided to join them and dig in. Zocalo offers a bit of a healthier twist on local Tex Mex. Of course you can go full on fattening, but you have the option for more fresh and healthy cuisine. They also have lots of vegetarian choices. YAY!

Laura: I've had a few items here and they that've been hit or miss. Hated the vegetarian stew- it's flavor was too plain and tasted like they compensated with salt. The torta was ok, but I wasn't a big fan. Too much bread with no pizzaz. I do like the chips they serve. They are the extra thick kind like you get in Mexico. I like to squeeze a dash of lime on them and chow down. The vegetarian tacos... OK, now we are getting warmer! Those were really good. This time, I ordered a big bowl of queso mixta - terrific creamy blanco queso with a scoop of guacamole and pico de gallo. It comes with a green salsa and a red salsa on the side. Not exactly the picture of healthy food, but I've been cutting back on dairy lately and after a few drinks I found it really hard to hold back.

Mariah: I know Laura liked the queso, but its a little more peppery and less creamy than I normally like, but, hey, its melted cheese, I'm not going to turn that down! 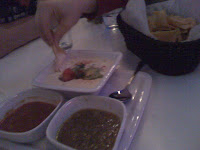 Mariah: But what they do have, that is probably one of the more amazing things I've ever put in my mouth.. Fresh, homemade churros. You get 5 mouthwatering, perfectly deep fried, covered in powder sugar, crisp on the outside, chewy on the inside, pieces of heaven. You have to eat fast around me because I can single handedly polish off a whole plate in less than 3 minutes.

Laura: This is why it's perfect for us to share a plate of churros. I think they are a tad too sugary. I suppose that's the point! After I dust a bit of sugar off them, they are just fine. They are warm and gooey and delicious and I usually end up fighting my way to at least one of them down before Mariah declares victory. 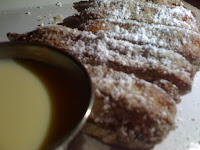