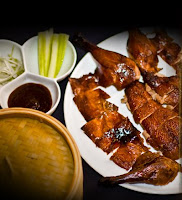 http://www.imperia-austin.com/
310 Colorado St.
Austin, TX 78701
(512) 472-6770
Laura: I ran into Nick the other night while listening to fabulous jazz from Jeff Lofton at the Belmont. We mused about music and recent life events over a sub-par portabello sandwich from the Belmont kitchen. I mentioned how much fun I was having with Dining In Austin Blog and he mentioned how great it was to finally have his parents meet his girlfriend over sushi at Imperia. I've been to Imperia once for their grand opening. The place was so packed that I couldn't even be bothered to wade through the cascades of people between myself and the bar. I've been interested in hearing how the place is doing now that it is no longer brand spanking new, so I suggested he guest blog about it for us and a few days later he actually followed through.
Ladies and gentlemen, I present to you Nick T.

Ma’s a fantastic woman. 3 and a half months ago, when I moved from my house on Slaughter to my new place central I needed help in a serious way. 4 years and 10 roommates later, my house needed a deep cleaning like nobody’s business. I knew that the person who was equipped to handle this job had to have many strong qualities. First off, they needed to care deeply for me to even consider assisting with this transition. Secondly, they needed to have a special knack for deep cleaning which only exists in people who were born before 1960.

Ma showed up at my house with a bucket of cleaning products and knee pads. That’s when I knew she meant business. Moments after her arrival, I was being put to work like an outsourced call-center employee. It was no longer my show; the power had changed hands and she had the conch. After several hours of deep cleaning and trips to the dumpster we had the place looking cleaner than it ever had. To show my gratitude, I invite the folks up to my new place for show and tell and dinner.

Originally, it would have been just myself, and I would of probably recruited my sister to join forces. However, there have been some recent changes in my life for the better that I didn’t plan for. I have now found myself in a new relationship with a special person, and curiosity had reached it peak from the parental standpoint. It was explained to her that the prime reason for this Sat night out on the town, wasn’t to have a family meet and greet with my new squeeze, but a long overdue repayment of services rendered... it just so happed that I was in a new relationship.

Now if I told you that I wasn’t a tad bit nervous, I would be stretching the truth a bit; although I had to remember that the rents were pretty chill and there was little to worry about. Keep the alcohol flowing and all will be fine. Arrangements had been made for the folks to show up at the new place at 7pm and I knew Kristen would be there shortly after. She generally runs a little late so I factored that in mentally. Girlfriend shows up, introductions are made and everything is well under way. I am successfully feeding everyone wine and even get my pop to hit the bottle of Makers when Ma went to the restroom.

I had made dinner reservations at Imperia which is an Asian-Fusion restaurant located in the heart of the warehouse district at 4th and Colorado where Mezeulua used to be. Imperia has been there over a year now, but they added a sushi bar about 6 months ago, so it offers a very wide range of deliciousness. I chose Imperia for the mere fact that I knew this a place that the folks would have never chosen on there own. I have eaten there several times in the past and have been WOWED! I had a $75 GF that had some stipulations that I can discuss later.

Our reservations were at 8:15pm and we arrived promptly. Upon arrival we were immediately seated. They were at about 60% capacity. We were offered a choice of bottled, tap or mineral water in which I made the executive decision to order tap for everyone. Knowing my audience, I knew this was a move that I could get away with. The server, an assumed lifer in the service industry, who rarely steps outside large Papa Johns pizzas and Ramen noodles, was kind nonetheless. Initially he offered to start us with some Edamame, which I agreed to. We ordered it spicy which turned out to be a great choice.

After a couple minutes of evaluating the drink and food menu, I could see the confusion in my parent’s eyes. They were overwhelmed with the menu and didn’t have the slightest as to where to start. I had given the wine menu to Kristen and asked her to choose a bottle. There didn’t seem to be any moderately priced bottles on their menu. She couldn’t find anything that started under $50. I like wine, but I still have a long way to go before I feel comfortable spending over $50 on a bottle of wine that I know very little about. In times past I have had 8 dollar bottles of wine that knocked my socks off. It is increasingly important to me to educate more and more about this vast world of grapes and spices, but until I become a self proclaimed sommelier, I don’t feel comfortable dropping mad coin on a bottle of vino. Short answer, we ordered drinks instead of wine. I suggested that Ma order the Ginger Mojito and pop ordered a Raspberry Lychee Martini. K and I both had Tito’s and tonic; always a winner with the bar crowd. Everything at Imperia seems to be made with special love and care. The drinks fall into this category as well. Both the mojito and the martini were savory.

At this point I took the liberty of informing everyone at the table that I would be ordering all the food. Everyone seemed to be fine with this. I started with some Dim Sum and sushi. We ordered the Seabass Kushiyaki Skewers and Escolar. Truth be told, I could easily make an entire meal out of these two. The delicate Seabass, seasoned to perfection, could just as easily be served as desert as well as a main entrée. We had one order of 2 skewers. Really you should get one order for every two people at the table. Again, it was ABSLOUTLEY DELICIOUS. A must anytime you step foot into Imperia. The naturally buttery flavor of the Escolar ensures that everyone at the table, Sushi lovers or not, will be asking for more.

Next I ordered the Yuzu Crusted Oysters w/ candied Hijiki salad w/ Wasabi crème and 2 seaweed salads. It would be very difficult for me to find anything negative to say about the food shared this evening and these two are no exceptions. The crust on the oysters was thick and cooked to perfection. It still left a juicy flavorful oyster center, which made for some interesting textures. I enjoyed the wasabi crème as much as I did the Hijiki salad. Just so you know, Hijiki salad is basically dried seaweed. Each oyster was served on its own Asian soup spoon with a pinch of Hijiki, the fried oyster and a small dollop of Wasabi crème. If you love oysters you owe it to yourself to give these a shot. It’s kinda hard to mess up a seaweed salad. I felt like we needed some green on the table. The rents had never eaten Seaweed salad and both enjoyed it thoroughly. Me, well you could fill a kiddie pool with the stuff and set me in it; I would be totally ok with it. In the event that you ever come across a vat of the stuff, feel free to contact me. :)

For the entrée I ordered the Imperia Dragon Rib w/ Yuzu frizzled onions and the Butter Poached Lobster mash. I can make this real easy on you, order them both. The Dragon Rib is an oversized braised short rib that is literally spoon tender. When you order spare ribs you can expect the meat to be fatty. At the same time, we all know that fat = flavor. The portion is large enough for 4 people to comfortably split and is recommended. Don’t try to take this thing on solo. I think that would kinda defeat the purpose of this type of dining experience anyways. Lobster mashers were something new to me and I believe the recipe was hand delivered by an angel from the heavens. I don’t remember the exact description of how they were prepared. It was something like, buttered reduction something or other, mashed potatoes, lobster and then more lobster. A uniquely exciting side that seems so simple you wonder why you didn’t think of it yourself. I mean seriously, is their anything that butter and lobster can’t do?

Even thought the consensus of the table was that of being full, you owe it to yourself at this point to order desert. The four of us split Imperia’s version of a Molten Chocolate cake with a coconut ice cream. At this point I was in such a haze from all the other wonderful flavors we had just experienced, I remember very little about desert. Other than the fact that it was devoured by the four of us in about 30 seconds, it must have been ok.

All in all dinner was an A+. Besides the fact that I couldn’t use my gift certificate, which was no fault to the restaurant, the entire dining experience went off with out a hitch. By no means is this a cheap restaurant to dine at. You do feel as if you get your monies worth. I didn’t mind paying full price.

After dinner, still being in the Warehouse District, we went to Cork and Co. to share a bottle or Riesling. This was a perfect transition and the bottles of wine are more moderately priced. Actually, you could get away with skipping the Imperia desert and holding out for desert at Cork and Co.

The conversation flowed nicely throughout the evening and it seemed as if Ma and Kristen really hit it off. Ma gave her the standard sales pitch on how much she loves family in general and, of course, ours in particular. I probably could have kept everyone out longer for more drinks, etc; although I felt as if ample time had been spent on this outing and all goals had been accomplished. Ma had been repaid the favor of helping me clean the house and my new lovely girlfriend had been introduced to the two peeps that help raise me. I took the parents back to my condo and sent them on their way. The full circle had been made and I was officially fat and happy.

Guests+ Imperia+Cork and Co. = a delectably, delightful evening!!
Posted by Laura at 11:53 AM